Bodybuilding: take care of your shoulders!

The shoulder is a complex of joints, consisting of five separate parts: the shoulder-shoulder joint, the scapular-thoracic, thoracic-clavicular, acromioclavicular and othoracic-thoracic joints. All of these joints are interconnected and closely related. They allow the shoulder to cover a large amplitude and therefore have great mobility, but this mobility is accompanied by low stability, which, due to the fact that the shoulder is a relatively superficial region, exposes it to significant stress. shock and injury in sports such as rugby, judo, American football …

Save your shoulders – cause of the problem

Strengthening the pectoralis major muscle, repeated periodically in fitness, bodybuilding and athletic strength programs, can lead to shoulder conflict if overused. Indeed, under the action and shortening of the thorax, the head of the humerus tends to slide in front of the glenoid of the scapula (articular surface), which leads to decentering of the shoulder. This decentering can then cause shoulder pain and lead to more and more significant tendon lesions, for example in the subscapularis muscles, sometimes reaching the extent of tendon rupture.

Save your shoulders – the solution

Numerous scientists as well as physical trainers and physiotherapists around the world talk about the importance of external shoulder rotators, adductors and scapula deflectors in preventing shoulder injuries. (see “To go further”) and even to increase strength in multi-joint movements (such as pushing movements). A comprehensive literature review is beyond the scope of this article. I still refer the reader to the reference bibliography at the end of this article.

Take care of your shoulders – to go further

To illustrate in my experience as an exercise coach the importance of strengthening these muscles to prevent shoulder injury in a rugby player, I developed for the 2007-2008 sporting season. the protocol used by the trainer. Espuars Rugby Physics, David LASERT. Three exercises are done once a week for 6 weeks for 19 players on this team, including 7 with different types of shoulder pain symptoms. At the end of this protocol, led by a physical trainer, all symptomatic participants reported an improvement in perceived pain. On the other hand, the structural balance (balance between muscle groups) improved among 19 players! 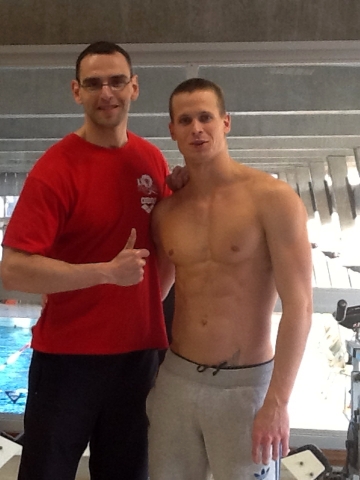 Save Your Shoulders – Exercise

For this type of exercise that involves muscles that are often under-trained, I recommend doing the exercises at a moderate speed and on repetitions with a working time of 30 to 45 seconds. 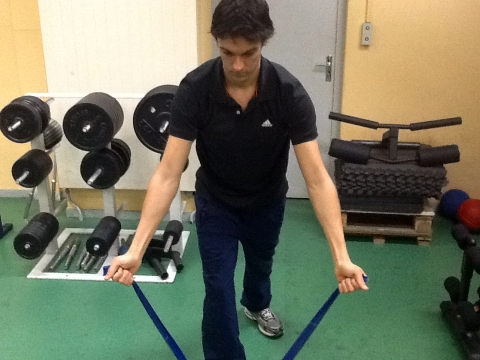 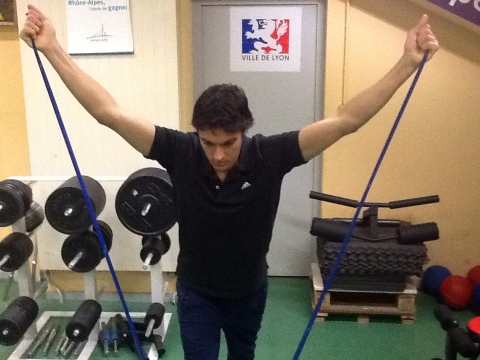 Exercise 2: Shrugging on a High Pulley 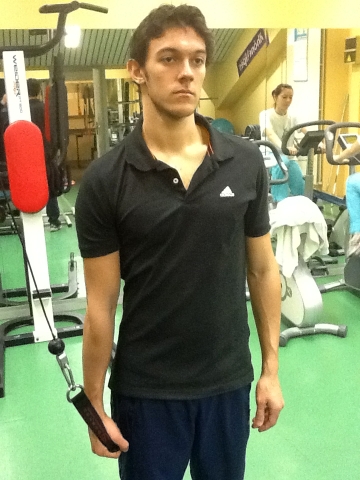 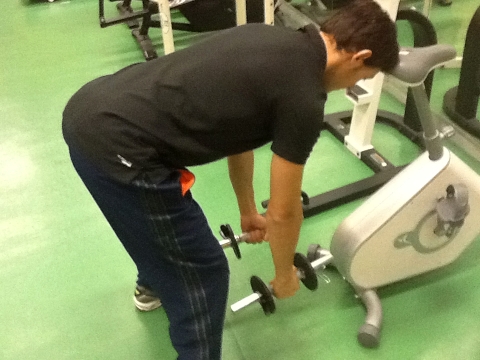 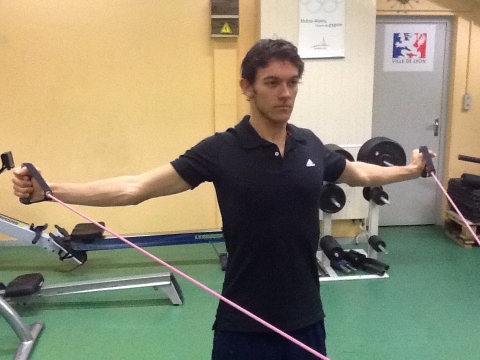 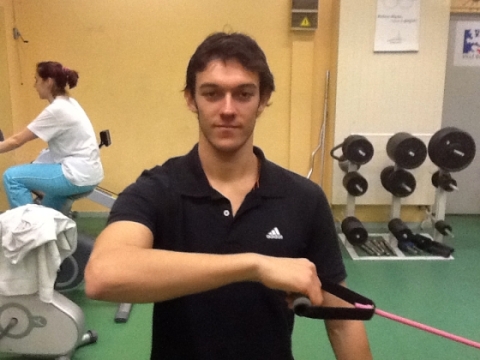 Exercise 6: Outside rotation with elastic (side elbow)

Exercise 7: External rotation with elastic (elbow along the body)

Save Your Shoulders – Part 2

Strength testing is a common practice among physical trainers. They want to test the relevance of the methods they use and quantify the progress made over the course of the season and sometimes even across the sporting career (EGGER, 1992).

For example, improving the incline of the bench press and the squat record for a weight thrower suggests good things about improving his personal record in his discipline (this observation is valid if his technique develops positively at the same time).

On the other hand, few French educators are interested in strength testing, not only as a virtual reflection of future athletic performance, but also as a means of preventing injury and ensuring longevity in the progression of physical strength.

To illustrate this last point, let’s go back to our weight launcher example. He went from 110 to 117 kg in incline bench press and from 160 to 172 kg in squat in a season, while his throwing method improved according to the national trainer. .

Therefore, we legally expect that during the competition he will significantly improve his personal qualities. Unfortunately, a rotator cuff injury to the “throwing” shoulder erodes this hard-won progress.

After various tests done for some on expensive isokinetic machines, medical personnel are evaluating this injury due to an imbalance in force between the inner and outer rotator cuffs. The latter are too proportionally too weak to ensure the “health” of the shoulder in the medium to long term.

Has the physical trainer been able to avoid this muscle imbalance through preventive injury prevention work?

How to deal with daily imbalances between muscles without the extremely expensive isokinetic machines and specificity with questionable sports gestures?

Fortunately, some exercise machines (mostly Anglo-Saxons) have studied the problem and offer tests of balance between muscles or between different types of movements: these are called force balance tests. Their virtues are attainable in the gym and backed up by extensive practice for nearly thirty years with the best athletes in a wide variety of sports.

DURRAL et al. (2001) and KAUFMANN (1999) have observed with relevance the dominant position of clean and jerk training (eg, bench press) in throwers who may predispose the shoulder to a variety of injuries. This dominance of traction training (agonist movement) by traction movement (antagonistic movement) can lead to decreased performance and even worse damage to the weakest muscles involved (for a full review of the scientific literature on this topic, see BAKER & NEWTON, 2004).

It was from this study and the structural balance tests developed by POLIQUIN (1999, 2006a, b) that I established my own power balance between push and pull.

Selecting push exercises is a variation of the traditional bench press with hands-free distribution. I chose POLYQUIN for the bench press with a tighter grip to match the distance between the two acromions: I called it the anatomical bench press. In addition to matching the gap imposed by the morphology of our skeleton, it presents a specificity with so many sports gestures.

For example, moving forward with a biacromial interval is what the hockey quarterback, rugby player, and American football team do to provide some examples in team sports. This is the position that we also take when we want to take an opponent away to judo or put straight boxing. Pushing a bobsled or 7,2 kg weight is also done around the bi-acromial gap and never with arm spacing corresponding to a wide or very wide handle that can sometimes be seen in the weight room during the bench press!

This anatomical bench press meets the reference test (value: 100%) for the strength factors of the upper limb. All of these tests are performed slowly and with control of the eccentric phase (approximately 3 seconds). The concentric phase should obviously be done as quickly as you can given the maximum developmental stress.

Anatomical bench press “keeps” your shoulders. Indeed, if you find it difficult to use the traditional bench press, the biacromial interval may be small or small! This is legal, since it corresponds to morphological reality, anatomically specific to you. But be careful between traditional and anatomical benches, you can lose 10 to 30% of your strength! Take this into consideration !!!

Now let’s move on to the description of the drawing exercise. I did the deadlift, but unlike the BAKER & NEWTON in 2004 and the POLIQUIN in 1999 and 2006 (a, b), I chose a hand grip with a biacromial distance between the two arms (to get closer to the pronation and arm width of an anatomical bench press). called it anatomical traction during pronation. It is preferable for the athlete to start from the top (he can climb, jumping or climbing so as not to get tired, but if it is too painful, start from the bottom!) Chin over the bar and descent to complete the stretching of the joints before returning to the starting position.

We could legitimately choose a horizontal tension exercise with a low pulley, but I wanted to run a test that could be easily performed by as many athletes as possible. And not all of them have a low pulley in the training room.

You take the anatomical bench press test and perform 100 kg at a body weight of 80 kg. To have good muscle balance and thus prevent shoulder restlessness, you should be able to perform the anatomical tensile test in repetition 1 with an overload of 32 kg (80 + 32 = 112 kg). If this is not the case, calm down the game on the bench and be in awe of the pull-ups, your shoulders will thank you !!!

October 25, 2020Leave a Comment on Bodybuilding: take care of your shoulders!Workouts